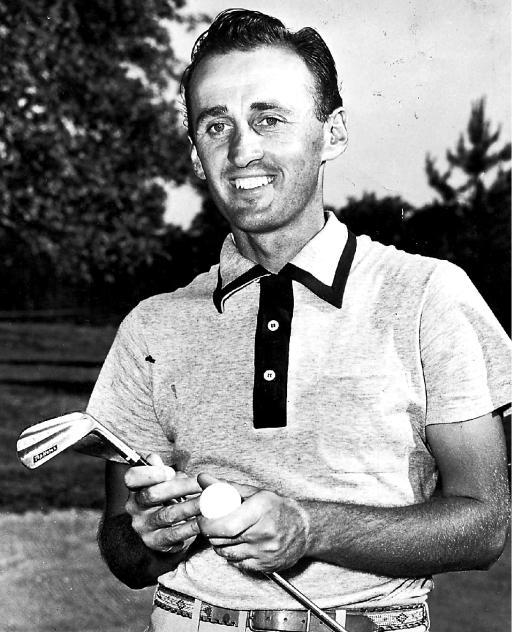 Art Wall deserves to be better known. Granted, he's famous in my family: My grandfather played with him (Cleveland Open Pro-Am, 1971) and I played with him (The Tradition Grand Tradition Invitational, 1992). Yet, outside of my blood relatives  and his  not many golf fans could have picked Art Wall out of a lineup. Nor will you find Wall mentioned in most golf encyclopedias. That's a shame, because given his distinctive accomplishments and his even-tempered disposition, he should have earned a permanent spotlight.

After serving in World War II, Art Wall Jr. emerged from the Pennsylvania Poconos to become a college golf star at Duke in the late 1940s. Arnold Palmer recalled that "the highlight of my freshman year (at Wake Forest) ... was beating Harvie Ward and Art Wall at Pinehurst No. 2 to win the Southern Conference Championship." 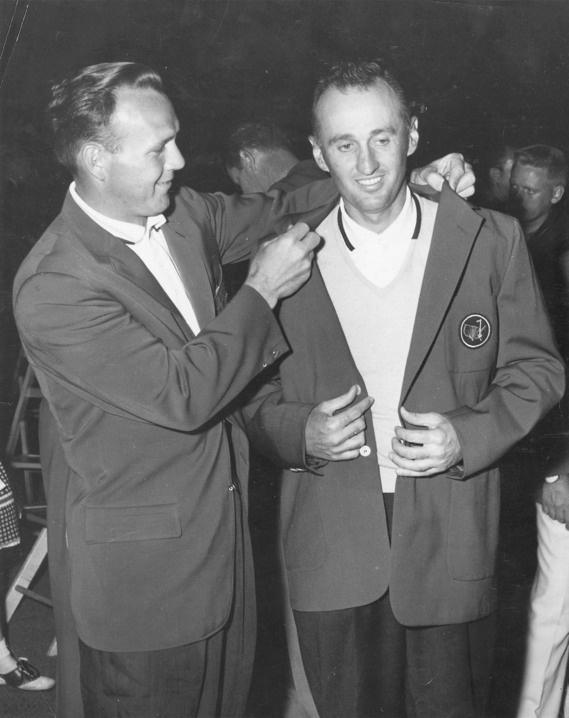 Described in the mid-1950s by Herbert Warren Wind as one of the "well-established circuit riders" of the PGA Tour, Wall catapulted from respected journeyman to unquestioned superstar with one staggering season. Fifty years ago this past April, Wall outsprinted the field to capture one of the most exciting Masters tournaments in its history. Covering the event for Sports Illustrated that week, Wind wrote "Art Wall's finish of birdie, birdie, birdie, par, birdie, birdie has no parallel in a major American tournament and probably in any major tournament." His brilliant 66 and 284 total edged Cary Middlecoff by one shot, but unfortunately, circumstances relegated Wall's achievement to Page 2. Indeed, "Palmer Loses Masters" formed the headline, which is what happens when golf's reigning royalty  and defending Masters champion  blows a big one. In the final round, Palmer's 6-iron found the water at the 12th, leading to a triple-bogey, then "(I) missed an easy three-footer for par on 17, and failed to make a four-foot birdie at 18," said Palmer. "If I had made a par at 12, I would probably have won the tournament by six strokes."

As with Nick Faldo at Augusta in 1996 and Paul Lawrie at Carnoustie in 1999, whose feats were subordinated to the collapses of Greg Norman and Jean Van de Velde, Wall's amazing finish was largely forgotten soon afterward. A pity, too, because Wall's shotmaking over the closing stretch was remarkable. Wall reached the par-5 13th in two, but had to two-putt from 80 feet for birdie. He left his first effort 15 feet short, and his second hung on the lip. As he approached the cup devoid of expression, his ball toppled in. He then holed a 22-footer for birdie from the back of the 14th green, hit the par-5 15th in two with a 2-iron and settled for birdie when his eagle putt lipped out. Two putts from 40 feet yielded par at 16, while a 6-iron at the 17th gave him a 15-foot birdie try  which he converted. At the 18th, Wall's 9-iron approach left him 12 feet away. He concluded that his putt would break both left and right, so he aimed straight at the hole and poured home one final birdie putt. When Middlecoff's bid fell just short, 35-year-old Arthur Jonathan Wall Jr. was the Masters champion. 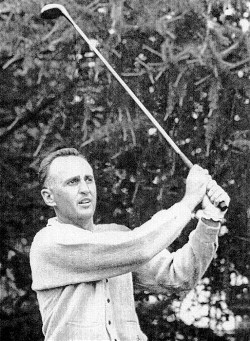 Unlike Lawrie, Orville Moody and Sam Parks Jr., who all won a major championship and little else, Wall was no one-hit wonder. He arrived at the 1959 Masters as the Tour's leading money winner, having already won the Bing Crosby National Pro-Am at Pebble Beach and the Azalea Open Invitational. He would also win the Buick Open later that year. Moreover, he won 14 times on the PGA Tour, with his first in 1953 and his final win in 1975, an admirable display of longevity. That last win  at 51 years, 7 months, 10 days at the Greater Milwaukee Open, where he edged Gary McCord by one  made him the second oldest winner in Tour history, next to Sam Snead's win at Greensboro in 1965.

Since Wall wasn't the oldest, this stat lay dormant until 1994 when Johnny Miller came out of retirement to win the AT&T Pebble Beach National Pro-Am, making him the first grandfather to win a PGA Tour event since  you guessed it Art Wall in 1975. Masters trivia fans also recognize Wall for the 7-under-par 20 he shot to win the Par-3 Contest in 1965, a score that no one has bettered, though it was matched by Gay Brewer in 1973. 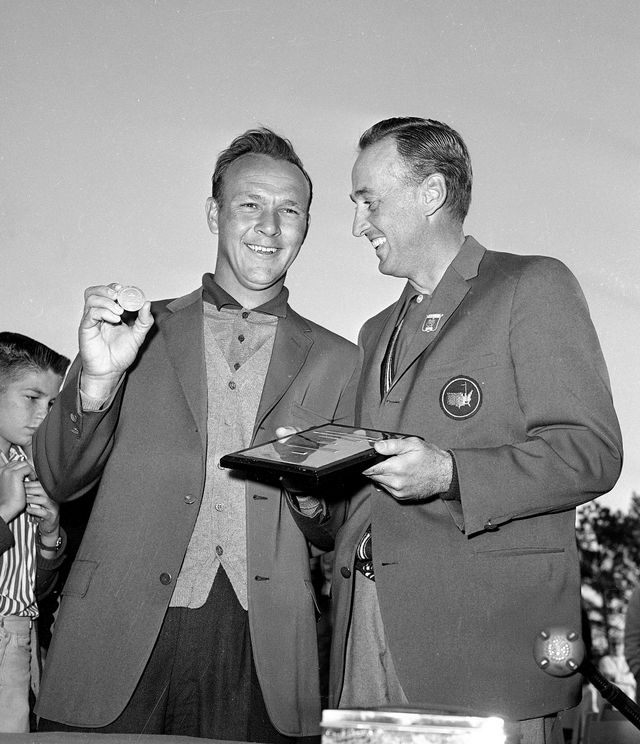 Wall's name pops up in many other contexts as well. He won eight times on the Caribbean Tour in the mid-'60s, competed in three Ryder Cups (1957, 1959 and 1961, going 3-0 in the '61 U.S. win at Royal Lytham & St. Annes) and helped kick-start the Senior Tour with his memorable 1979 playoff birdie-fest alongside Tommy Bolt at the Legends of Golf against eventual winners Roberto De Vicenzo and Julius Boros. Wall and Bolt won the event the next year, and in 1981 Wall finished fifth on the Senior Tour money list.

Nonetheless, if Art Wall is known best for anything in golf, it's for his astonishing record of more than 40 aces in his playing career, the highest number for any Tour professional/major championship winner. Most estimates put the number at 46; others credit him for 45. Why isn't this better known? Mostly because Wall himself squelched any talk about it. There was chatter  whispers  that perhaps Wall had padded his numbers at an easy hole at his home course at Pocono Manor. Tom Weiskopf told Sports Illustrated in 1996 that there were snickers about Wall's aces even among the Tour pros. "I don't care if you're standing on the same 90-yard hole, hitting a wedge into a green shaped like a punch bowl," said Weiskopf, who had 16 aces at that point in his life. "Thirty or 40 aces is a helluva lot."

Yet, to some extent, the achievement haunted Wall. "He was such an honest and gracious man, the kind who would never hurt a bird," remembered Poconos-area pro Terry Hurst a few years ago. "It hurt him. He'd get quiet if someone brought it up and he'd always shy away from the subject." Time Magazine reported in 1965 that "The world-record holder of holes in one, Art Wall has 35 aces to his credit after 16 years on the tour  and has yet to make a dime out of any of them. 'I don't even talk about it,' he says morosely."

"I remember once we went down to San Diego and I was playing with him when he made one," said Bob Goalby (the 1968 Masters champ and a longtime friend of Wall) a few years back. "We're like, 'Damn, Art, you got another hole-in-one.' He says, 'Fellows, I'm aiming at the hole on every shot,' but it sounded more like, 'Give me a break.'"

Ultimately, the history books probably neglect Wall because he simply refused to call attention to himself. When Wall died of respiratory failure at 77 in 2001, his college roommate, Jim McNair, told the Augusta Chronicle: "He was very quiet and serious." Added 1957 Masters champion Doug Ford, one of Wall's closest friends: "Art had a lot of opinions, but he was a quiet guy and kept them to himself a lot of times. He was always there for his friends. He had more friends than anybody else on Tour."

Jack Nicklaus was quick to credit Wall for his counsel. Nicklaus was as "nervous as could be" during the third round of his first tournament against the pros, the 1958 Rubber City Open at Akron's Firestone, but noted "Wall tried to settle me down with some quiet words." In 1962, in contention at the U.S. Open, Nicklaus faced a dicey chip from Oakmont's fearsome rough at the 71st hole. Said Nicklaus, "During practice early in the week, the 1959 Masters winner, Art Wall, had given me some tips on how to handle this miserable stuff, and once again, I salute you, Art. Somehow I stopped the ball four feet from the hole." 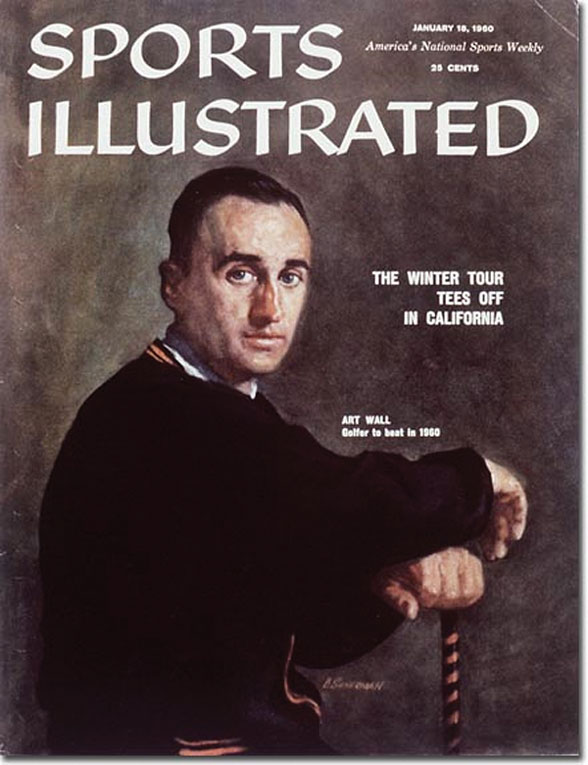 Art Wall practically went out of his way to avoid publicity. Sought out by photographers in that magical 1959 season, Wall would plead, "Look, fellows, you've got enough shots of me and you're neglecting the other players." Renowned for his short game and putting, Wall's primary weakness was his driving; some blamed the 10-finger "baseball" grip he employed on full shots. What made him a champion, according to Herb Wind, was his "remarkable gift for judging distance, as good as anyone in the game." Even by 1971, Wind observed of Wall, "He was still an authoritative striker of the irons, and discerning spectators were equally impressed by his politeness and inveterate sincerity."

By the end of the 1950s, Arnold Palmer was clearly destined to be golf's greatest star. In 1959, however, Art Wall Jr. won the money title, Vardon Trophy and PGA player of the year honors. Palmer may have been king, but 50 years ago, Wall held the crown.

By Joe Passov for Golf.com

Board of Directors at Honesdale Golf Club

The Honesdale Golf Club Board of Directors are searching for…

Art Wall deserves to be better known. Granted, he's famous in my…