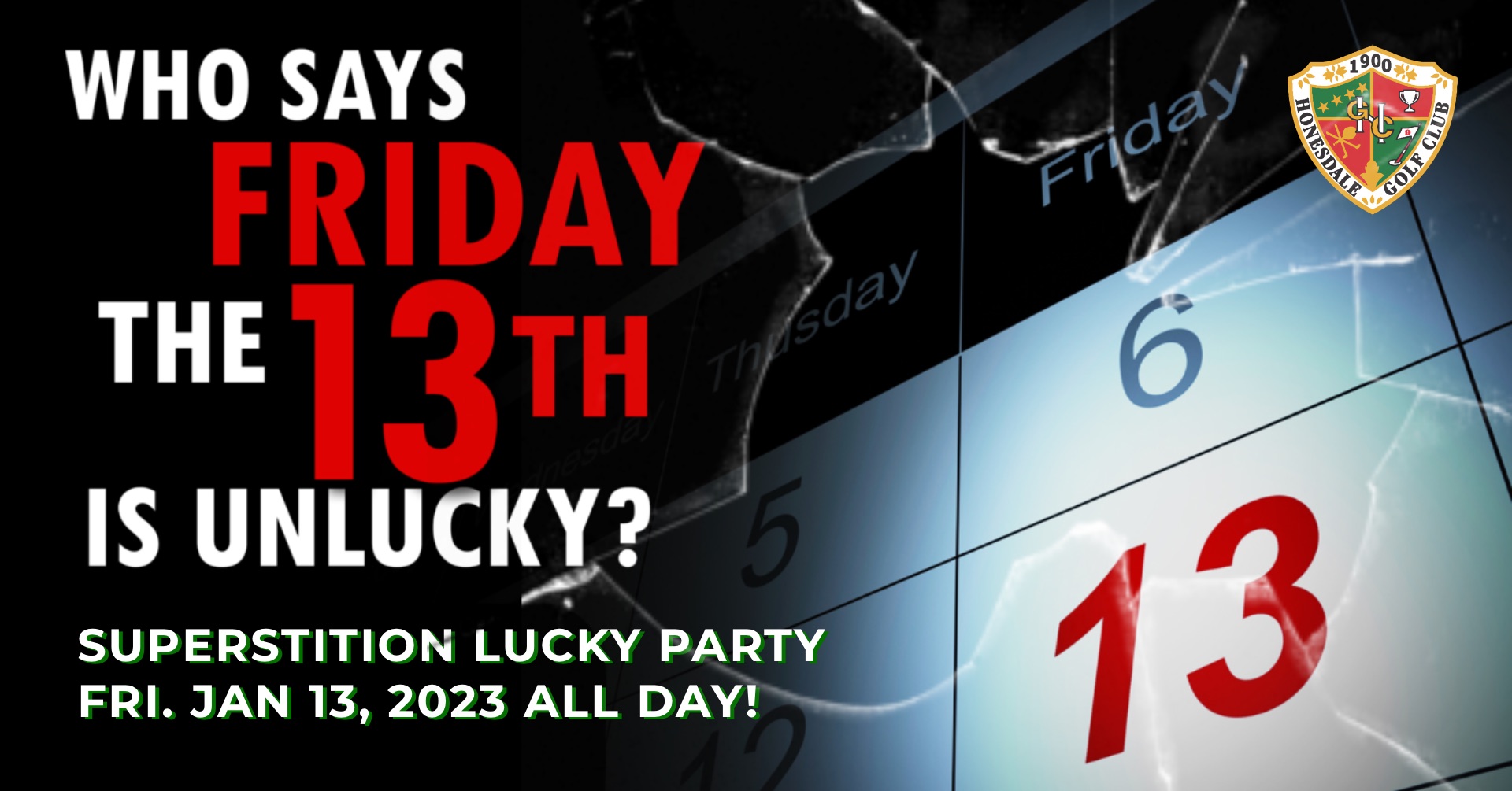 Join us for a Superstition Lucky Party at Honesdale Golf Club on Friday, January 13, 2023.


We will be serving all day around the world comfort food and drinks to bring good luck on one of the biggest superstition days of the year, from 12:00 pm - 8:00 pm. Come play some lucky/unlucky games with pull tabs, a special 50/50, drink some fine spirits to keep the bad spirits away, and eat your favorite foods, prepared by President Miller.


Our menu (while supplies last) will include but not limited to appetizers to include grapes, soft pretzels, ham, roasted pork sliders (lucky pork served on lucky round buns), Italian sausage, long noodle pasta (with lucky long noodles), coleslaw (lots of lucky cabbage), and homemade potatoes (more lucky round food). Drink Specials will include, Lucky Charms Martini - It tastes like the cereal, and more.

Soft Pretzel $4
Many Germans say eat a big soft pretzel to symbolize good luck, health, and prosperity with a side of golden cheese.

Grape and Feta Salad $7
In Spain and Mexico, people try to eat 12 grapes as quickly as possible because each grape will bring luck for the 12 months ahead. You can take your time and savor this Chef prepared salad with grapes, feta, pears, mint, and drizzled honey for richness.

Personal Stone Pizza $8
Round foods are in the shape of a “ring” and represent the year coming “full circle.” Get your personal good luck pizza pie with a traditional Italian style, ham and cheese, pepperoni, BBQ pulled pork, chicken bacon ranch, sausage, meat lovers, or tasty veggie pizza with peppers and onions.

Pork and Long Noodles $13
Many countries serve noodles to symbolize the longevity of life. Try the long noodle pasta and pork with a side of greens, but whatever you do, don't break the noodles before you eat them (it's all part of the tradition).

Italian Sausage and Long Noodles $13
This Italian Sausage Pasta includes a rich homemade sauce with sausage, tomatoes, peppers and onions, as well as plenty of fresh herbs and cheese.

Pork Wontons Pot-stickers and Greens $13
The reason that dumplings are a lucky food for Chinese New Year is because they symbolize wealth. Why? They look like boat-shaped Chinese gold and silver ingots! The idea is that the more dumplings you eat, the more money you may make throughout the year.

Spiral Ham and Potatoes $19
Eating ham is a tradition that dates back to early Europe, when the pig was considered a symbol of luck. Enjoy this spiral round luxury with the traditional greens and lucky round potatoes.


Salmon With Creamy Noodles and Spinach $19
Fish are considered abundant because their scales look like coins and they swim in schools (and they swim forward). It’s especially popular in Asian cultures to eat a whole fish for New Year’s. Enjoy this salmon with Long Noodles and spinach (greens) for prosperity.

All Entrees served with Golden Sweet Cornbread, as many of the southern states in the United States, cornbread is considered lucky due to its golden brown color—which is said to bring gold and wealth in the upcoming year.

It's always a good time for cake—especially if you're celebrating a special occasion. A round, ring-shaped cake in particular is known to represent the full circle of life. Try one of home made donuts or something unexpected like a slice of round-shaped monkey bread.


The story behind the prices.

Number 5, five is an interesting number because it occurs a lot in nature. Humans have five senses (sight, smell, taste, touch and hearing) and five fingers on each hand. There are some fascinating creatures like starfish that have five-fold symmetry, that means you can rotate them five times and they will still look the same.

Number 7, seven is another fascinating number. There were seven wonders of the ancient world, amazing man-made structures of which only one survives today – the Great Pyramid of Giza in Egypt. In music there are seven different notes in a harmonic octave. There are seven natural colors present in light, seven skies, Seven Seas, seven days in a week.

Number 8, eight is lucky in Chinese culture because the Chinese word for “eight” sounds like the word for “wealth”.

Number 19, nineteen, in numerology meaning of number 19 is associated with the energy of expansion and a new start. This number encourages you to reach for your goals and to dream big! The meaning of angel number 19 can also be a reminder to stay positive and optimistic. It is a sign that the universe is conspiring in your favor and positive changes are on the way.


Number 4, four is bad luck in the Far East. The pronunciation of the number four in Japanese is very similar to the word death, and because of this, four has been considered bad luck in Japan, Korea and China. It is considered very bad luck to give a gift that is made up of four pieces to someone. Many buildings in heavily Asian areas do not have a fourth floor, much like the way North American cultures treat the number 13. In Western culture, four isn’t necessarily considered lucky or unlucky, however, there are a few unlucky fours. The Four Horsemen of the Apocalypse from the Christian bible, and most swear words are called “four letter words.

Number 13, thirteen the hysteria surrounding unlucky 13 in Western culture has become so commonplace that an actual sickness called triskaidekaphobia; the fear of the number 13. You would be hard pressed to find a building with a 13 th floor in North America. The origin of this superstition is mainly unknown. In the famous painting of Jesus at the Last Supper, the 13 th person at the table, reading left to right, was Judas, who betrayed Jesus.