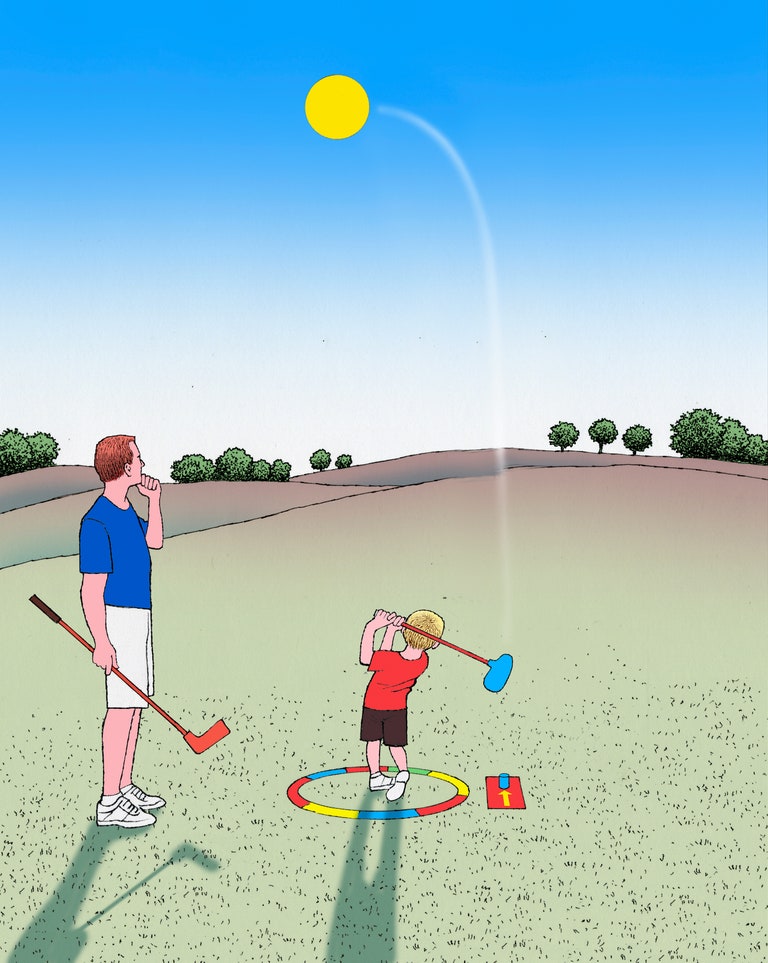 More young kids are taking up the game than ever before. Why isn’t yours?

When Malini Rudra first met golf, from the seat of a cart watching her mother, father and older sister play at Tam O'Shanter Club on Long Island, she was 8, and it was not love at first sight.

"Please," she told her father. "Never teach me to play this boring game."

And Rajiv Rudra did not.

The fact that 15-year-old Malini is now a New York metropolitan-area competitive champion and hopes to play golf in college is a story the game wishes it could tell more often. It's a story of family support—and restraint.

It's a story of access, and of innovative teaching from an instructor who has made bringing kids into the game his life's work.

James Hong, director of junior golf programs at Harbor Links Golf Course in Port Washington, N.Y., changed everything for Malini. She was getting tired of her first sport, tennis, which had become "too confined." She decided to try hitting a few golf balls at the Harbor Links range with her family. "James walked down the line and came up and gave her a few pointers," Rajiv says. "From that point on, she was like a fish to water about golf."

Related: A survival guide to playing golf with your kids

There are about 3 million junior golfers age 6-17 in the United States. They represent some 10 percent of golfers, account for about 6 percent of 18-hole equivalent rounds (they play a lot of shorter rounds) and represent about one of every three beginners. At a time when the industry's struggles induce eye-rolling headlines like "Golf Once Again Finds Itself in the Rough," junior play is, for the most part, a success story. The game-growth initiatives precipitated by declining play (and excessive course building) have in many places spawned innovative programs designed to reach kids at their level—and make it fun. "When we got into the game, we just stood on the range and whacked balls," says Mike Fay, of Boyne Mountain Resort in Michigan, two-time Northern Michigan teacher of the year. "The junior clinic was the job of the third assistant. No disrespect to that assistant, but we [the head teaching professionals] need to be out in front on this. We need to be involved."

And unorthodox, or just plain silly. Attend a junior "clinic" today and you might not recognize your old game. You'll see Golf Baseball, played with oversize SNAG (Starting New at Golf) plastic clubs and as many as 25 fielders. Or Cow Pasture Pool, a putting contest where teams knock balls around on a 15-foot square. Or you might encounter Operation 36, which includes an on-course challenge in which kids begin 25 yards from the green, and, when they score 36 for nine holes, move back in increments to the tee, at each stage having to pass the "36" test. "When you grow up thinking one, two or three shots, and not obsessing about making an 8, your mind-set is essentially to go low," says Michael T. Bulger, who teaches at the Patterson Club in Fairfield, Conn. "The kids figure out what they need to do to progress."

Attend a junior ‘clinic’ today and you might not recognize your old game.

This kind of teaching prepares kids for increasingly popular national programs like Drive, Chip & Putt, PGA Junior League Golf (see chart below), LPGA*USGA Girls Golf and The First Tee's National School Program, which has trained physical-education teachers at more than 8,000 schools to incorporate golf into their curriculums. "I think we're benefiting from the fact that parents see their kids dropping out of other sports because of an overemphasis on competition, on specializing in one sport at an early age," says Ryan Graff, vice president of program development for The First Tee. "Physical educators love the program because of the character teaching, and that their big concern, safety, is alleviated because of the SNAG equipment." Though The First Tee targets school districts near its existing chapters and lower-income areas, TGA (Teach, Grow and Achieve) Premier Junior Golf is a for-profit company that has put the game into schools in 19 states and Canada by incentivizing franchisees.

Thanks in part to all of these programs, junior participation increased by 18.5 percent from 2009-'14, according to the National Golf Foundation. Upcoming data also suggests the trend is continuing. And though the present number of juniors is essentially the same as before the Tiger Woods era, emphasis on simply exposing kids to golf—through free admittance to professional events and highly social outlets like Topgolf driving ranges—has many industry leaders optimistic. "It feels much better than the numbers, and the numbers aren't bad," says Joseph Beditz, president of the NGF. "Though we have the same number of juniors as we did 20 years ago, before what really was the golf bubble, we're seeing more strength among younger juniors. We're losing high schoolers but gaining grammar-school kids. Overall, a plus." That's because, in Beditz's view, when teens and college-age players step away from the game, most return. "Exposure is the name of the game because it doesn't have to be continuous," Beditz says. "If they had a good experience, they'll come back when they get soccer or synchronized swimming or whatever out of their blood."

A new program launched by the Northern California Golf Association might be the simplest yet at translating early exposure to regular play. Youth on Course's mission is simple: Kids play for $5. Now adopted by 12 golf associations as far east as Chicago, YOC has subsidized nearly half a million rounds for kids 18 and under. It also offers scholarships and caddie opportunities. Elijah Collins is an example of the lifelong golfer a program like this can create. He took advantage of the YOC caddie program, met a great teacher while playing up and down the California coast for $5, and is now on the Lake Forest (Ill.) College golf team. "My life wouldn't be anything like it is without Youth on Course," says Collins, the son of a single parent.

That kind of later access is critical when you're exposing kids as young as 3 or 4, which happens frequently these days. Granted, lessons at this stage are basic. "You might start them just rolling the ball," says Megin O'Donnell-Kelly, who teaches juniors at Brook-lawn Country Club in Fairfield and has had as many as 60 kids in her junior club championship. "You give lots and lots of compliments. The first etiquette lesson might be, 'Here's the bathroom.' We forget how intimidating all this can be for kids." O'Donnell-Kelly, an LPGA teaching professional, is the daughter of a school social worker and a registered nurse. "I'm kind of a golf nurturer," she laughs.

So is Hong. Other professionals send assistants to shadow Hong because he's adept at fostering beginners while producing serious competitors, too. Hong helped Stephanie Kim and Kelly Shawn reach the LPGA Tour, but he's also masterful at winning over resisters like Malini.

"We keep it simple and fun," Hong says. He teaches "in short bursts," not long sessions. He follows instruction with contests—"Kids love the little games"—and works almost as much with the parents. "On the applications we ask about the kid's personality. Is he easily discouraged? Is she shy? We want to know what kind of kid we're getting. And then let's say I learn he or she is shy, a little intimidated by the surroundings. I'll go up to that kid and kneel down so I'm on his or her level and say, 'Are you Tommy? Great. I've been waiting for you to come. I'm so happy you're here.' I'll put him in a group with a couple of 'veterans' of the program and say, 'Now be careful of these guys, they're troublemakers,' and pretty soon the kid is giggling and laughing."

"James is funny," says Reena Bhasin, whose two teenage sons are strong, competitive players. "When he gives my boys a compliment, they're walking on air because he doesn't hand out many. But then when I see him with the little kids, he's a goofball."

‘I see too many parents out there not making it fun.’ — Keegan Bradley

"I had one dad bring his daughter for her first lesson," O'Donnell-Kelly says. "He says, 'Should I hang out here?' And I kind of said, 'Why don't you go hit balls for an hour?' I think it's important to let the kids have their own space."

Hong says Malini's parents, Rajiv and Rica, "should write a book on parenting skills for competitive juniors because they are wonderfully supportive, strict with discipline, yet not pushy with golf." Hong, of Korean descent, also has the finesse to deal with conflicting cultures among golf's increasingly diverse clientele. "It's tricky," he says. "The Asian cultures are tough. And so non-Asians come, and you have to figure out, are they here because they want toughness, or do they like it less tough? So I ask them. Ultimately it's a balance, and sometimes you can't win. Some of the Asian parents say you aren't tough enough. Some of the American parents think you're too tough."

It's a common trap for parents to get too involved in the details of the instruction.

PGA Tour star Keegan Bradley, accepting the Met Golf Writers Association Family of the Year Award this summer, encouraged parents to "remember it's all about fun. I see too many parents out there not making it fun."

Hong's three-tiered program (beginning, intermediate, competitive) adheres to that philosophy. And his principles reflect what other well-respected junior coaches told us:

▶ Don't let kids specialize in one sport. Give golf its season, but encourage kids to play other sports, too.

▶ Get kids their clubs from the start. No cut-down irons or hand-me downs. Light is right.

▶ Keep the instruction light, too, at the start. Let kids tell you when they want to get more serious. "The ones who want to compete will tell you," Fay says. "But let 'em tell you."

▶ Be a cheerleader, not a coach.

Hong says he used to have the problem of kids who would have a great time, make real progress, and then when their parents asked them what they'd learned, say, "Oh, we hit balls." Now Hong sends a report home so parents can know exactly what's going on. Coaching parents is a big part of what the most successful teachers do.

"The most important drive in golf is the ride home," Fay says. "I urge parents to ask their kids: 'What did you learn? Did you have fun?' " Fay tells the story of his daughter Rachel coming back from a Drive, Chip & Putt competition (now available for sign-up in all 41 PGA sections).

"I said, 'How was it?' She says, 'Fun, but I could do better and it would be more fun. I could have putted better. I'd like to work on that.' The next thing you know, we're in the living room, and she's looking down at a mirror on the floor, and I'm going, 'Are your eyes over the ball?' But it was her idea."

For Malini, she hopes college golf is next. She's sending her scorecards to some colleges on the East Coast with strong academics. "I hope to use golf as a tool, because I know it can be really important in business," says the girl who once found the game boring. "I love golf.

I love the challenge of it, how creative you can be. I expect to be playing for the rest of my life." There you go. One down. About 3 million to go.

More young kids are taking up the game than ever before. Why isn’t…

An Easy Fix For Your Chips

There are many reasons golfers struggle when chipping, but it's often…