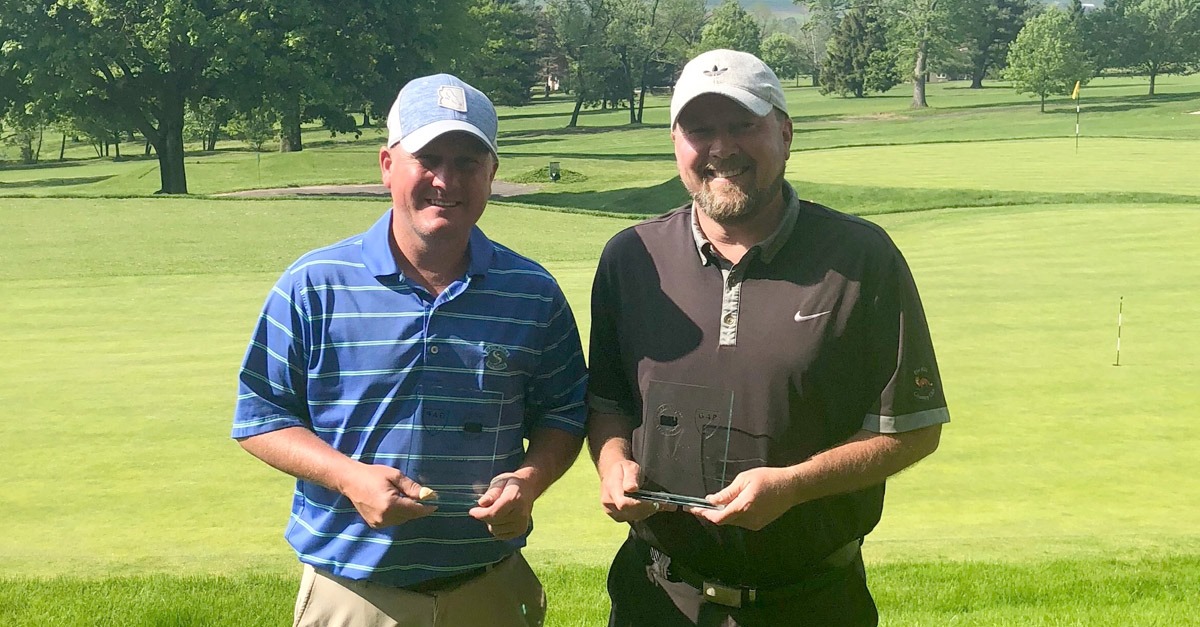 For James Gardas and Eric Williams, winning the John Moore Memorial Tournament has become quite the habit.

The two took to Stone Hedge Golf Course and Valley Country Club May 18-19 and captured the event’s 35th edition for their 11th title. Rounds of 70 and 64 allowed the longtime friends to top a list of 16 teams competing in the Championship Division.

Despite the ultimate result, Saturday’s opening round didn’t start as the pair hoped. After three bogeys on the first six holes, the team found itself sitting in an early hole at 3 over. Back-to-back birdies on the eighth (par 4, 322 yards) and ninth (par 5, 596 yards) holes from Williams, the 2018 AGA/GAP Player of the Year, turned things around, however.

During the inward stretch, three more birdies from Williams overshadowed a lone bogey and allowed the duo to post a first-round score of 70. The 1-under total placed Gardas and Williams two shots behind the Day One leaders going into the final round.

Sure enough, Williams’ birdie fest continued on Sunday morning — this time with added ferocity. On the front nine alone, Williams carded six birdies on his own ball, powering the team to an outward score of 29. Gardas added a birdie of his own on No. 10 (par 4, 390 yards), before the team finished with eight straight pars to close out a 7-under-par 64 and to seal the victory.

Williams’ onslaught of birdies was the result of excellent iron play. The 46-year-old began the day by hitting the green in two on No. 1 (par 5, 524 yards), resulting in a two-putt birdie. On No. 3 (par 4, 314 yards), Williams knocked a sand wedge 94 yards to two feet before following with a wedge from 65 yards to five feet on No. 4 (par 4, 343 yards). The Honesdale Golf Club member kept the momentum going by rolling in a crucial six-foot par save on No. 6 (par 4, 369 yards) before closing the front nine with three consecutive birdies. That phenomenal run was capped by a birdie putt on No. 9 (par 3, 181 yards) after Williams hit an 8-iron to 15 feet.

“I just got real hot,” Williams said. “It was just one of those things where you kind of get it going.”

“It makes it easy for me that’s for sure,” Gardas said jokingly. “I just sit and watch. He’s hitting it very well right now and he’s putting fantastic.”

Despite his modesty, Gardas did more than just play spectator. During the final round, he made a birdie of his own on No. 10 (par 4, 390 yards), after hitting a knockdown 8-iron 135 yards up the hill to four feet. Down the stretch, Gardas made several crucial pars to help maintain the lead.

“We kind of knew where we stood,” Gardas, 42, said. “We missed a couple of good opportunities coming in but we were able to end up winning by two shots.”

As evident by their 11 wins at the John Moore, team golf success has always been a staple of the partnership between Gardas and Williams. Gardas, of Hawley, Pa., and Williams, of Honesdale, Pa., are two-time qualifiers of the U.S. Amateur Four-Ball Championship, having competed at Winged Foot Golf Club in 2016 and Pinehurst in 2017. The pair also won the Pennsylvania Golf Association’s Four-Ball Championship in 2008 at Country Club at Woodloch Springs..

Both credit the familiarity they each have with the other’s game as a primary reason for their accomplishments.

“We are best friends,” Gardas said. “We’re just used to playing with one another. We’re comfortable with each other’s games and we just have a good partnership. It makes golf fun.”

Williams, too, recognizes the trust and familiarity that exists.

“He [Gardas] has a very good short game,” Williams said. “I can pretty much rely on him to somehow get it around the green and get it up-and-down. It’s very, very comfortable playing golf with him. It’s not like one of those things where we have to coach each other every single shot.”

Gardas and Williams will look to continue their success at the GAP Middle-Amateur at Rolling Green Golf Club May 22-23.

GAP
Celebrating Amateur Golf since 1897, GAP, also known as the Golf Association of Philadelphia, is the oldest regional or state golf association in the United States. It serves as the principal ruling body of amateur golf in its region. The Association’s 274 Full Member Clubs and 75,000 individual members are spread across the Eastern half of Pennsylvania and parts of New Jersey and Delaware. The GAP’s mission is to promote, preserve and protect the game of golf.