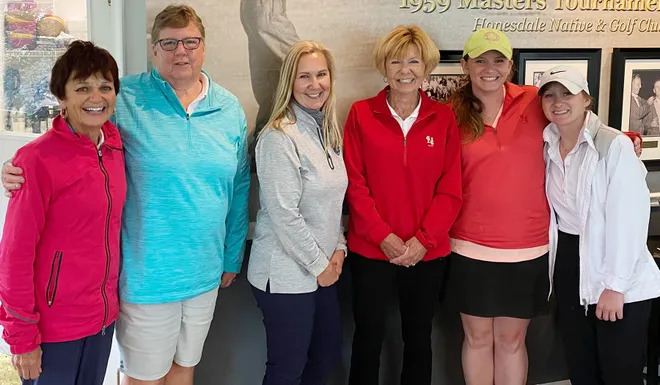 The historic Honesdale Golf Club recently provided the backdrop for one of the year's most anticipated events: The Women's Member-Guest Tournament. The 2021 tourney attracted elite linksters from all over the area, providing plenty of excitement for local fans. The team of Bridget Simons and Julia Santo (far right). defended their title. They're pictured here with runners-up Rae Ann Bishop and Julie Cerra, along with third place finishers Joanne Wychowanec and Sue Kulasinsky.


One sure sign the pandemic is lifting is that the local sports schedule is once again packed with exciting events.

Honesdale Golf Club is a perfect example of this much-anticipated return to normalcy. The venerable course has been hosting a slew of tournaments that were canceled in 2020 … including one of the year's most anticipated.

Last Tuesday, HGC provided the backdrop for the Women's Member-Guest tourney, an event that attracted top tier golfers from all over the area.

The weather wasn't exactly perfect in the morning, but clouds eventually cleared and a shortened 9-hole tourney was completed by 24 teams.

Bridget Simons and Julia Santo captured this year's crown, their third in a row.

They were chased home in the Championship Flight standings by the teams of Rae Ann Bishop and Julie Cerra (second), Joanne Wychowanec and Sue Kulasinsky (third).

Next up on the HGC summer schedule is the 2021 Memorial. This tournament is held each year in honor of all club members who've passed during the previous 12 months.

Weather permitting, it will take place this coming weekend, July 10-12.

Simons and Santo are beginning to carve out a niche for themselves in the HGC history book.

Simons is a graduate of Honesdale High School who went on to play collegiate golf at East Stroudsburg University.

Santo was a standout at Wallenpaupack Area before taking her game to the NCAA level at Gannon.

The two have combined to form a fearsome team on the local links … as once again evidenced by their performance at HGC.

Simons and Santo carded a sizzling 34, which is 2-under par for the venerable course. Bridget and Julia recorded three birdies on holes three, five and seven.

Bishop and Cerra also turned in a solid effort. The pair posted a score of 38; 2-over par and a total of four strokes off the lead.

Joann Wychowanec and Sue Kulasinsky partnered up to claim third place with a final score of 39.

In First Flight action, the team of Sandy Newell and Tanya VanOrden powered its way to a razor-thin win.

Newell and VanOrden combined to shoot a score of 43, one stroke better than runners-up Chris Fritz and Taylor Rickard (44).

Diane Simmons and Lisa Bryant also carded a 44, but settled for third place on a match of cards.

Second Flight laurels were won by Cindy Rickard and Veronica DePaoli, who closed out with a 47.

Ann Marie Simons and Candy Watson claimed runner-up honors with a round of 50.

In keeping with HGC tradition, several on-course competitions were also held during the tournament.

Cerra took home the prize for Closest to the Pin on hole number seven. Simons walked off with the award on number four.

Veronica DePaoli unleashed the Longest Drive of the day with a blistering shot from the number nine tee box.

A Bit of History

Honesdale Golf Club was founded in 1900 by a group of local links enthusiasts led by William J. Birdsall.

These men originally laid out a crude three-hole course on the Birdsall property in Seelyville.

However, after officially forming the club, a plot of land overlooking Honesdale was purchased from the Blandin Family.

Augustus Thompson was one of the earliest golfers and he won the very first men's club championship in 1901. Miss Mary Tracy, who later became Mrs. Charles Bentley, was among the first female golfers to play the course.

While any written records of the club's first five years have been lost, there are still fascinating documents from the early 1900s.

Among them is the minutes of a meeting held on May 30, 1906, which was attended by Grace Salmon (secretary), Mary Tracy, Messrs. Bentley, Hand Farnham and Birdsall.

The earliest list of HGC members (1906) is significant in that women outnumbered men by a total of 106 to 80.

Interestingly, the first time club minutes mention the results of a tournament was September, 1912. According to the entry, WB Birdsall captured the title at an event for which eight men had qualified.

HGC also sponsored tennis tournaments in its earliest days. The club's first tennis chairmen on record are listed in the April, 1916 minutes. They were SJ Eddy and the Rev. HS Whittaker.