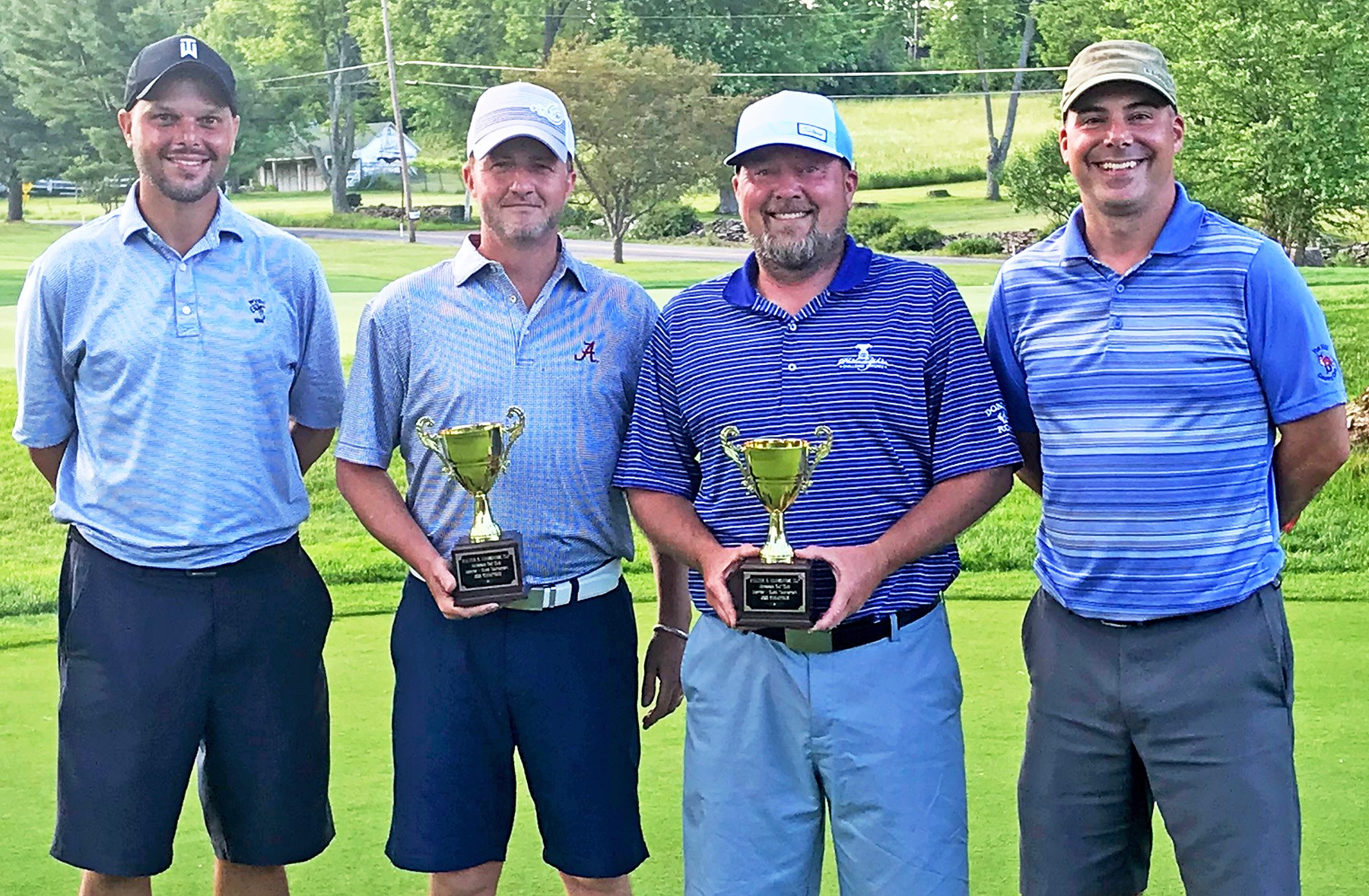 The Honesdale Golf Club hosted its first major tournament of the year this past weekend, the 51st Annual Member-Guest. Pictured here are the two teams who battled it out in the Championship Flight finals (from left): Tom Biscotti, Dr. Matt Haley, Eric Williams, John Mikiewicz.


Local links fans turned out in force this past weekend to witness one of the area’s most popular competitive events.

According to organizer Bob Simons, this year’s edition of the tourney attracted 46 teams and nearly 100 participants.

“Everything went extremely well,” he said. “The weather cooperated and the course was in fantastic shape. Chris Moran and his crew did an outstanding job.”

As has been the case many times in recent years, Honesdale’s own Eric Williams was right in the thick of the title chase.

When the final putt dropped and all the scorecards were signed, it was Williams and his partner, Dr. Matt Haley, who had finished first in the Championship Flight.

The dynamic links duo defeated John Mikiewicz and Tom Biscotti by a score of 2 and 1.

“Both teams played great golf and that’s what it’s all about,” Simons said. “It’s so good to see all the camaraderie and things getting back to normal a little bit.”

The 2020 HGC Member-Guest was divided into six flights utilizing a better-ball partners format.

Qualifying was completed by Friday night. Flight assignments were handed out and competition began Saturday morning.

By Sunday, the top teams were squaring off for bragging rights in each division.

Williams and Haley were looking to re-claim the crown they’d already won three times after finishing out of the money in 2019.

They defeated the teams of Pingel & Vannatta in the quarterfinals and Tamblyn & Haley in the semis. Mikiewicz and Biscotti downed a pair of formidable duos in Gardas & Bolcavage and defending champs Teeple & Karabin.

This set up a memorable clash witnessed by a big, enthusiastic gallery whose members did an admirable job observing social distancing protocols.

The match stood dead even through 11 holes before Williams began flexing his muscles. A product of the Honesdale High School golf program, Eric has enjoyed solid success as both an amateur and professional.

On Sunday, Williams birdied three consecutive holes to give his team a commanding lead. While Mikiewicz and Biscotti managed to slice the margin to two holes late, Eric and his partner closed out the match on 17 with a par.

This marks the fourth time Williams and Haley have captured the Member-Guest championship. Eric now boasts a total of six titles on his resume.

Joining Williams and Haley in the winner’s circle Sunday were...

Fifth Flight competition implemented the Stableford scoring system in which points are awarded based on scores for each hole.

The team of Ron Dutton and John Firmstone took first place with a total of 87 points. Scott & Rick Miller finished second with 84.

While team play always takes center stage at the HGC Member-Guest, we’d be remiss in not recognizing a phenomenal individual effort by Mark Bartkowski.

A former member at Scranton Municipal, Mark now plays most of his golf at Wemberly Hills in Olyphant. He’s 56-years-old and a longtime educator in the Pocono Mountain School District.

Bartkowski regularly tees it up with Don Stanton each summer at the HGC event. This year, the duo powered its way to a runner-up finish in First Flight competition.

However, their outings on Saturday and Sunday may be most remembered for Mark’s heroics at what’s informally-known as the “Rock Hole.”

During quarterfinal action, Bartkowski pulled a wedge out of his bag at the par-3 13th hole and took aim at the flag. Mark’s stroke was true and the ball ended up in the bottom of the cup for an ace.

This was the second hole-in-one of Bartkowski’s career ... but, he wasn’t nearly done yet!

The very next day (on the very same hole) Mark once again unleashed his wedge on the 111-yard hole. This time the ball sailed past the flag, but caught the hill behind the pin. It spun right back down the incline and into the cup.

“I’ve never see anything like it!” exclaimed Simons, who’s played in every single Member-Guest for more than a half-century. “That’s something he’s going to remember for the rest of his life.”