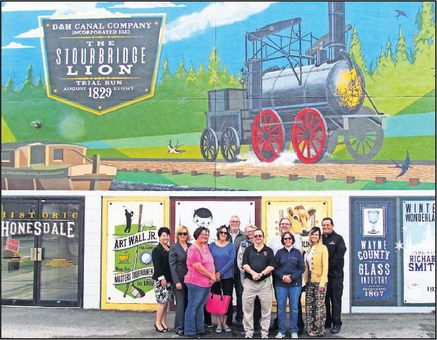 Proudest and most prominent, the Stourbridge Lion steam engine which kickstarted the American railroad occupies the lion’s share of wall space.

“The community is what made it happen,” stated Greater Honesdale Partnership (GHP) Treasurer Al Beck.

Beck explained the GHP commissioned the piece when the building owner approached the organization with an interest to beautify the wall and town.

“The property owner was very familiar with what was going on in Pittston with the murals over there,” said Beck, “he came to us and said ‘Hey, can we do something like that here in Honesdale?’” Beck noted GHP sought funding from various community sources, receiving assistance from the John and Helen Villaume Foundation, the Wayne County Community Foundation, Grimm Construction, and Scarfalloto’s Towne House Diner.

Additionally, the mural was supported in part by the Pennsylvania Council on the Arts, a state agency funded by the Commonwealth of Pennsylvania and the National Endowment for the Arts, a federal agency.

“I think it’s great,” said Beck of the mural, “Everything that’s on there is representative of our area and what Honesdale is all about.”

The mural was designed by Jeff George who laid out and painted the historic work alongside Pauline Glykokokalos.

Funds were gathered around the end of June, said George, with work on the mural commencing later that summer and finishing near the end of September with an application of clear coat.

Both George and Glykokokalos noted the exceptionally rainy late Summer/ early Fall drew out the time it took to complete the project.

“It’s a nice project to do in the summer,”

George expressed gratitude for the scissor lift used to complete the project, donated by Grimm Construction.

Noting the mural “...is something that everybody can relate to,” Glykokokalos stated about the mural, “It was really fun working on it because so many people stopped by and were so encouraging and supportive, so we really felt like we were doing something for the community.”

George noted he is particularly fond of the Highlights’ panel as he first came to the area to work for the company.

Glykokokalos likewise praised the Highlights’ panel, but also noted the cut glass panel displays an actual piece from the collection of Jim Asselstine, owner of the Dorflinger Factory Museum.

“We kind of wanted to showcase something that he has because ...it’s just our way of thanking him for what he’s done over there in White Mills, which is completely amazing,” said Glykokokalos.

Both artists noted they are interested in painting further displays and are looking for property owners seeking to decorate the sides of their buildings.

Present for the mural dedication, Honesdale Mayor Sarah Canfield stated, “I think it is a very neat dedication to the town. It gives a little bit of everything all over Wayne County, not just Honesdale.”

Commending the artistry and noting her children likewise enjoyed watching the mural bloom to fruition, Canfield added, “It just gives a feel for the history that this town has, and as a member of Honesdale for my entire life, and my extended family has been here forever, it’s just something that is great.”