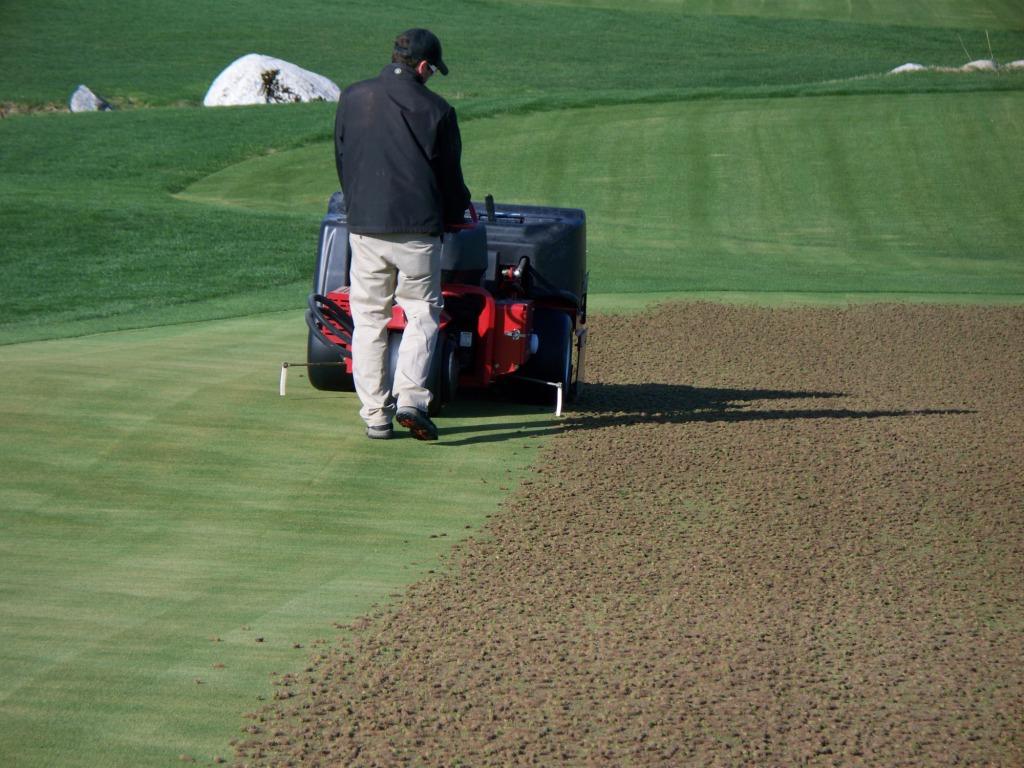 Fall aeration has begun on our course under the direction of our course superintendent, Chris Moran and will run through Friday morning October 25, 2019.

No golfers are ever thrilled to arrive at a course, only to find that they will be putting on greens that have just been aerated.

The USGA’s Green Section has been helping golf courses deliver the best possible playing conditions for nearly 100 years. USGA agronomists work with golf facilities across North America to help them create and maintain environmentally and economically sustainable golf courses that give you the best playing experience, even if you have to occasionally play on aerated putting greens

Aerating putting greens might create a short-term disruption in your game, but the long-term benefits greatly outweigh the inconvenience. Learning more about why and how superintendents aerate putting greens can make it easier to be patient during the process. Here are five things every golfer should know about aeration:

1. We aerate to improve, not annoy

Putting greens receive more traffic than any other playing surface. The aeration process helps relieve the compaction caused by all that traffic. It also helps create a firm, smooth putting surface by controlling thatch and promoting healthy turf roots.

Thatch is a layer of old plant material that accumulates at the soil surface. If thatch on putting greens is not diluted by aeration and topdressing, it will act like a sponge, holding water near the surface. Excessive thatch creates soft playing conditions, inconsistent green speeds and increases the risk of disease.

Do you ever wonder why aeration is commonly performed when putting greens are playing their best? Aerating when grass is healthy and actively growing minimizes damage and allows for a quick return to optimal playing conditions. Aerating at other times may be more convenient for the golf schedule, but it lengthens recovery times, increases the risk of an invasion of weeds and could cause lasting damage.

It may seem like there are more holes than grass on the putting greens right after they’ve been aerated, but this is an illusion. Typically, aeration affects less than 10 percent of a putting surface.

5. Sand is part of the plan

Aeration and topdressing are no fun for the crew and can be disruptive to golf. However, the life of the putting greens is longer than a single season and the effort needs to be made. There is an old saying, "Pay me now or pay me later" and this certainly rings true with core aeration.

A special thank you to Chris Moran and his team for taking such wonderful care of our golf course.